What the false and NOT free press writes about us is a lie. Do not believe a single word of these newspapers and resources, which, instead of covering what they see with their own eyes, are voiced only by the dictated installations. They were taken away the right to speak the truth. For them, the free democratic choice of citizens is annexation, and those who disagree are immediately subject to harsh criticism. Any person from you who come to the Crimea will see everything by yourself. The celebration of the 5th anniversary of the Russian Spring was incredibly positive, happy, and truly nationwide!! And we are not a “gang” of marginals, extremists and nationalists... We are with our people. If we are a gang, then why are we met in cities with flowers, hands are shaken at every corner, and ordinary people say to us "thank you"? Nationalism is not typical for Russia. And who, if not us, having offices of Night Wolves in all regions, as well as abroad, do not understand this?
We love our Motherland, we are ready to fight for it and, if necessary, die. But we do not want the rest of the world to be bad. We want that beautiful Germany, Spain, the Balkan countries, the whole world and, of course, beloved Serbia be preserved and well. The Russian dream is not only in the grace of being for the Russian people, but also for the peoples of the whole world, of all humanity. 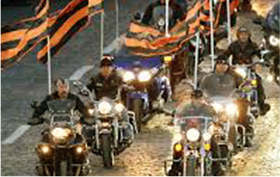